Flash and CUDA installation via JetPack

JetPack provides possibility to flash Jetson with fresh L4D OS (Linux for Jetson, modification of Ubuntu 16.04), to install CUDA and some other packages. JetPack can be used only on host-computer under Linux (Ubuntu 14.04 is officially supported, but works on 16.04 too) - but it can be used in VM - just don’t forget to passthrough USB-device NVIDIA Corp. - connected Jetson Dev Kit.

After connecting Dev Kit in recovery mode to host-computer - you can flash OS and install CUDA.

At stage of packages choosing I left only OS installation, CUDA and examples:

Network Layout - the easiest one is “Device accesses internet via router/switch.”: 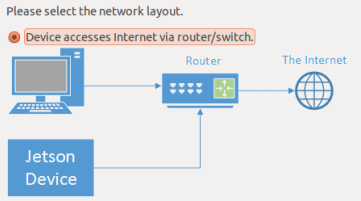 It is useful not to delete files that JetPack downloaded and saved on the drive.

Once I had OS installation failed - but another try succeeded after complete cleaning of JetPack folder.

L4D OS installation on SSD or SD instead of embedded memory

Embedded card has 32 Gb only, so I installed OS on SSD. JetPack has no support for this, but it is quite easy to do on your own:

After inserting SSD to host-computer you should format ext4 partition and install L4D OS on it.

After configuring Jetson via JetPack (it was described in the beginning of article) and SSD preparing, you should insert SSD in Jetson and launch it to configure SSD as filesystem for launching (instead of embedded memory):

If something gone wrong and system failed to launch from SSD - you always can reconfigure Jetson from scratch as described in the begining of article.

In process of OS filesystem copying to SSD partition - you was able to copy cuda-repo-l4t-8-0-local_8.0.82-1_arm64.deb (as described above), and then you can install CUDA on Jetson: